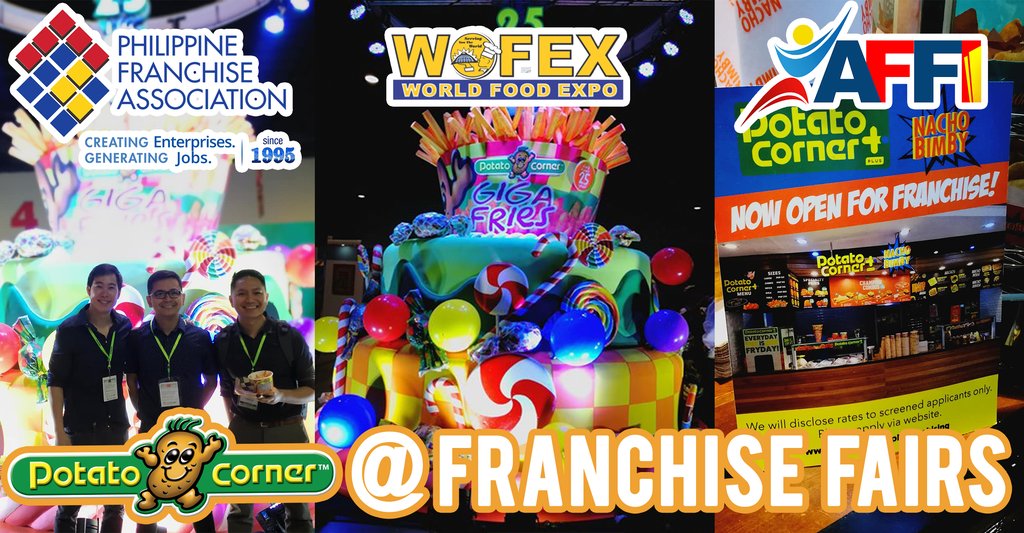 2017 was a landmark year for us as we celebrated our 25th anniversary. To really evoke the sense of a big, year-long birthday bash, we brought to life a giant birthday cake diorama, and brought it along with us in all the franchise fairs we participated in.

Our business has lasted this long thanks to our loyal and hardworking franchisees, and we look forward to working with more people to literally put a Potato Corner in every corner in the country. Here are some of the fairs we went to! And for 2017, one of the other milestones we achieved is that our Potato Corner + Nacho Bimby concept stores are now ready for franchise! We also had a blast at PFA’s Franchise Asia!

And, we feel greatly honored to have received the President’s Award for Global Filipino Franchise and PwC Iconic Franchise Awards at PFA’s Franchise Excellence Awards 2017. These awards push us to strive harder.

And we got really excited about making it to the spread of the Philippine Daily Inquirer because of that!

And may we say that we were so flattered to have received a special mention from PFA during our 25th anniversary celebrations in October. Thank you!

If the photos from the other 2 fairs don’t show the vastness of our diorama, then maybe these photos from our participation in AFFI’s conventions will do the trick! And finally, to those who are wondering as to where our giant cake was during our 25th Anniversary Party at Blue Leaf Filipinas, here it is! We had lots of real cakes made for our guests, mainly franchisees, to bring home and enjoy.

Do you want to be part of the Potato Corner family through franchising?

Check out our franchise page for more information: https://potatocorner.com/pages/franchising

Potato Corner is now on GrabFood!